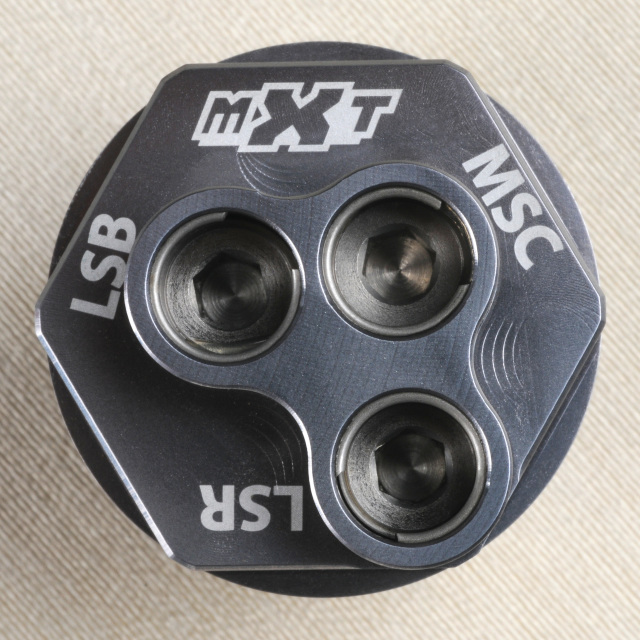 This is included in our Works Level WP Shock Builds. Available only in Gunmetal Grey.

It features 3 independent adjustments to the following circuits:

20 Clicks available. Standard Adjustment is 5 clicks out. The Low Speed Bypass adjusts the amount of fluid pressure that can bypass past the adjustment circuits. It has the effect of delaying the speed at which the MSC comes into effect and makes the shocks action more loose and free in both directions.

20 Clicks available. Standard adjustment is 12 Clicks out. Inspired by and designed around Enzo Racing's (Ross Maeda) system. The Mid Speed compression regulates a sub valve which reduces or increases the amount of pressure that goes through the stiffer main compression valve. It has a primary effect on chassis pitch and response to large g-loads and higher speed shaft movements.

10 Clicks available. Standard Adjustment is 5 Clicks. This stands for Low-Speed rebound. We used 3 letter acronyms, had we used 4 we would have choosing ULSR Or Ultra low speed rebound. It is reducing the force created by the rod charge, and has a ability to calm the shock in large rolling undulations at corner entry or at times when the chassis is partially unweighted (Such as hardpack corner entry), without having to over adjust the shocks primary clevis located traditional rebound adjuster. This creates a calmer more planted chassis without a sacrifice in the shocks ability to follow the ground while under throttle in low traction.

We recommend the following adjustment procedure. To optimize the adjustments start with the LSB. Typically this is the least adjusted circuit, and in many ways has the greatest impact on overall feel. We recommend that use it to create the feeling of movement that you are looking for based on your conditions, it is not uncommon to end up with the adjuster at 1-2 clicks out in some MX conditions, and offroad and 2 stroke riders may end up at 15. Either way once the "gross" feel is achieved us the MSC speed adjuster to adjust for the feel in larger faster movements that your after. You will turn it frequently, and you will see that the majority of your riding adjustments will be done to this circuit after you initially set the LSB.

The LSR is the last adjuster to tune. It effect is somewhat elusive in certain conditions. Until you recognize the symptoms and response I recommend you wait until you are riding a slick hard surface with bumps and undulations. Pay attention to the adjusters effect at corner entry and the feel of the bike as you brake or drop off a ledge. Adding LSR will slow the lift and give the rider a calmer feeling bike. Once you notice the effect tuning this circuit it will become more intuitive. You may be asking yourself why would I not just run it full in? The effect can still limit traction and can increase the shocks tendency to pack up when on the gas over larger rollers. So like all adjusters there is a sweet spot that balances the positive and negative aspects.